In my last post, we discussed the problem that text controls residing in a FlipView are not scrolled / moved to the top area when the Windows touch keyboard fades in at the bottom area of the screen. In this post, we take a look at the keyboard dismiss problem that also occurs when you put input controls into a FlipView.

Let’s start with the simplest context possible: if you create a form view consisting of input controls that are placed within a panel (e.g. a StackPanel), and the touch keyboard is currently visible because the user is editing a text control, then you would expect the keyboard to fade out when the user taps on the background of the form (i.e. he or she does not hit any other input controls). This works totally fine in UWP apps if one uses the UI elements I just described, as you can see in the two following images:

However, we cannot scroll to the input controls that are below Combo Box 7, so let’s add a ScrollViewer and a FlipView to the mix. When you perform the same experiment now, you will see that the touch keyboard is not dismissed and instead, the first input control in your form is focused:

Why is this happening? Well, in this case it is not the FlipView, but the ScrollViewer wrapping the panel containing the actual input controls that’s causing the problem.

The ScrollViewer does not receive focus, but forwards it to the first focusable child element

To better illustrate how the different UI Elements are nested within each other, let’s check out one of Visual Studio 2015’s great new features: the Live Visual Tree. With it you can inspect the Visual Tree that was created from your XAML at run-time. In my example, it looks like this: 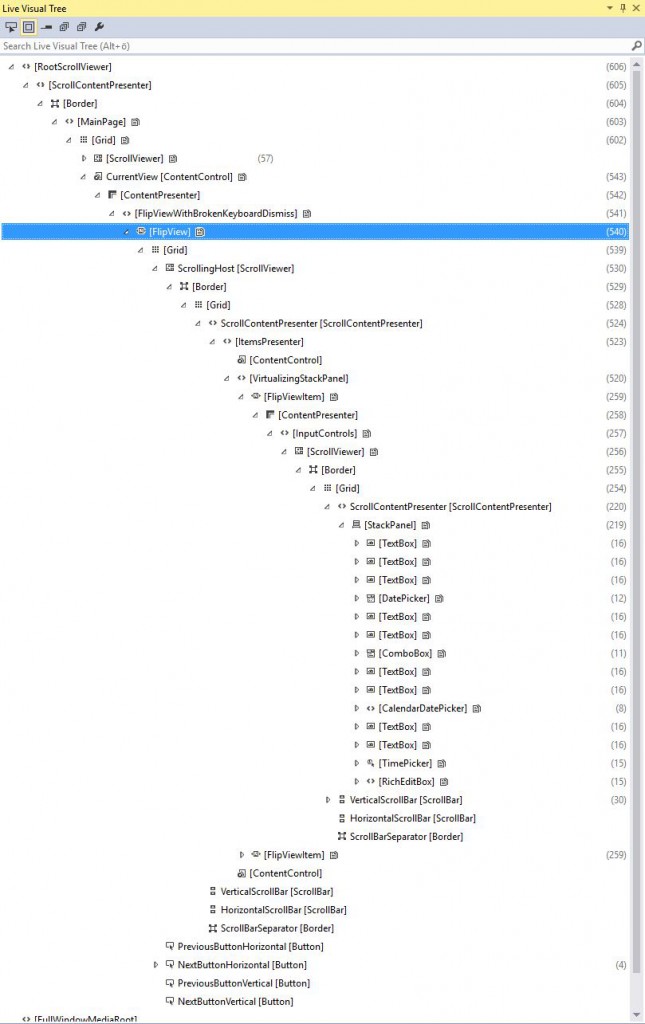 As you can see, I marked the FlipView that we’re actually talking about and it contains a lot of child items, so let’s dig through them to get to the problematic elements:

With this somewhat complex Visual Tree in mind, let’s strip all unnecessary elements away and focus on the key players to understand what’s really going on.

In the image above, you can see the FlipView indicated in blue, the horizontal ScrollViewer of the FlipView in green, and two vertical ScrollViewers in orange, each of them containing a panel with form controls. The black box indicates the view port which is just the part of the view the user can currently see through his or her screen. Now let’s discuss some common interactions that the user will likely perform:

But what happens when the user just taps on the form background to dismiss the touch keyboard? Of course, this event is handled by the one of the vertical ScrollViewers first, and because a ScrollViewer is no TabStop by default, it will get the first focusable child item (in our case the first text box within the form panel) and focus it instead. Now the behavior we explored makes perfect sense, and the only thing you have to do is setting the ScrollViewer.IsTabStop property to true.

To focus correctly is not that easy

In the end, the solution to that problem was not so hard, but you should keep some details about focus and the touch keyboard in mind:

In conclusion, I would definitely advise you to read Microsoft’s Keyboard Design Guidelines to know all things necessary about the touch keyboard.

If you create forms in UWP apps and place them within other controls like a ScrollViewer or FlipView, please ensure that you set ScrollViewer.IsTabStop to true on all ScrollViewers that you control. Otherwise you might experience a strange keyboard dismiss behavior as a ScrollViewer tries to focus the first control within your current form – and this is not very user-friendly.

Check out the source code for this post on GitHub.